London-based bookseller, Mary Cooper, inherited and successfully ran her late husband Thomas’s business at Paternoster Row from 1743 to 1761. A trade publisher by profession, her name frequently appears on extant publications; from some of the earliest printed children’s literature, and scholarly works in Latin, to controversial religious pamphlets of the Enlightenment era.

Michael Treadwell suggests that trade publishers performed three roles: to provide a distribution network for books self-financed by authors or printers, to present convenient means of selling cheaper works like pamphlets, and to put their own names to imprints of potentially controversial works to protect copyright holders. Despite her evident success, and little contemporary evidence of how she was regarded, the latter role has caused Cooper to be unfairly labelled a “rogue” by some historians (Brant and Rousseau, p. 6). Yet, contrary to building a business based on controversy, during her lifetime Cooper appears to have cultivated an image of legitimate success in a profession heavily reliant on reputation and personal connections.

Contemporary descriptions paint a neutral picture of trade publishers. Dunton’s 1705 Life and Errors (Treadwell, p. 114) observes their merely making “a specialty of publishing books, pamphlets and periodicals for others”, and Dyche’s 1740 Dictionary (image 687) defines someone who “has his name put at the bottom of pamphlets, news-papers, &c. tho’ the property is in another person, to whom he is accountable for the sale”. These definitions, in turn, are certainly applicable to Cooper, who appears on the imprint of many shorter works as a legitimate distributor. Bookseller Robert Dodsley of Pall Mall, for example, collaborated with Cooper on 167 of his publications; likely, in part, because her location in Paternoster Row was conveniently close to the heart of the bookselling community and City trade. 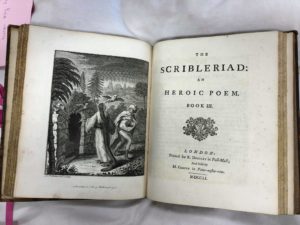 Henry Dell’s poem The Booksellers (1766) illustrates that success within the competitive London book trade was heavily dependent on reputation. His observations cuttingly remark on the location, goods, demeanour and even accents of the London traders. Belanger has pieced together Dell’s anonymous references: Andrew Millar, for example, is described as “a Scotchman” who is “True to his int’rest, and to meanness too” (Belanger, lines 38-41), clearly demonstrating his perceived status as an ‘outsider’. St Clair argues that a “high monopoly period” followed the Act of Queen Anne (1710) where powerful London booksellers formed a “cartel” to impose restrictions on book trading (St Clair, p.93). Using their influence, they enforced their sole right to print even after copyright had expired, and threatened prosecution if booksellers stocked cheaper Scottish and Irish reprints. Indeed, many key London booksellers, such as Dodsley, chose to avoid the expense of registering all their copyrights at the Stationers’ Company, seemingly relying purely on their standing within the trade to protect them.

With reputation dictating success (and retention of copyrights), Dodsley’s ongoing business relationship with Mary Cooper is perhaps indicative of the positive way in which she was viewed. Tierney observes that much of Dodsley’s work followed the typical trade publisher style; 54% of his publications being 48 pages or less. Likewise, over 50% of Dodsley’s solo publications were produced and sold in collaboration with the Coopers. Treadwell argues that cheap, smaller publications required large numbers of rapid sales to be profitable. Cooper’s books, in turn, demonstrate a marked focus on marketability and commerciality: often costing just a few pence, with the price conspicuously advertised below the imprint, and in economical octavo format (that is to say, markedly cheaper and more accessible than the folios or quartos produced by London booksellers).

Beyond the mere convenience of Cooper’s location and specialism, however, the Register of Entries confirms that she and Dodsley operated closely in wider business affairs: on July 30th, 1744, there are consecutive entries, in their names, for The Complaint or Night Thoughts. Both were registered, on their behalf, by “Ben: Cowse”, suggesting that Dodsley and Cooper also collaborated in buying copyrights.

As well as topping booksellers, such as Dodsley, Mary Cooper worked with self-financing authors and printers who required a point of distribution. Printers’ typical contract work on finite jobs removed them from additional profits if the books sold well, hence many sought to purchase copyrights and print their own publications. Under the London monopoly, however, booksellers operated ‘closed sales’ for copyrights after the death or retirement of a member and ensured the most lucrative were only bought by their affiliates. In this climate, printer William Bowyer purchased and published some of the more controversial texts, including those of Robert Clayton, Bishop of Clogher. Surviving company ledgers list a total of seventeen Clayton publications, three of which (An Essay on Spirit (two editions) and A Defence of the Essay on Spirit) omit Bowyer’s name on the imprint and list only sellers, including Cooper. Clayton’s Essay argued the highly controversial standpoint of Arianism: the belief that, within the Holy Trinity, Christ is subordinate to the Father and Holy Spirit, since his ‘creation’ implies an earlier time when he did not exist. Although Bowyer was a dissenter, his concealment from the imprints in favour of a trade publisher may be linked to the controversy.

Significantly, Bowyer did add his name (alongside Cooper’s) to Clayton’s Vindication of the Histories of the Old and New Testament, printed just a year later, which presented the same Arianist argument. This contrast to his earlier reluctance might be explained by the Essay having been published anonymously. To be the principal named figure on the title page of a potentially controversial text could have damaged Bowyer’s professional reputation for printing scholarly works. Despite any controversy with the Essay, Bowyer (like Dodsley) was notably content to use Cooper as a distributor, and to openly acknowledge their business relationship in his other works. Moreover, the imprint to Clayton’s Essay names her alongside the high-profile bookseller, John Noon; implying, perhaps, that little significant stigma was associated with such a publication for the distributor. Noon was possibly even one of the elite London ‘cartel’ as, after his death, his books and copyrights were tellingly sold to a “select number of booksellers”.

One example of collaboration between Cooper and Hildyard. Sterne, Jacques. The danger arising to our civil and religious liberty, from the great increase of papists… (York, 1747) [NLS Nha.O165(5)]

The business networks she formed were arguably as important to Cooper’s trade publishing success as her reputation. The Coopers’ business dated back to at least 1709 and Mary passed the business to her brother-in-law, John Hinxman, on her death (who had himself been a shopman for Dodsley). Cooper’s involvement in selling some of the earliest extant children’s literature also implies that she had developed a successful system of mercuries and hawkers within London. These itinerant pedlars were key to the distribution of the cheaper publications associated with trade publishers, and this new and niche literature would have relied heavily on such links to become profitable. That Cooper felt confident to take on this project demonstrates the standing of her business. Furthermore, her network extended beyond London: she worked as a London distributor for at least eleven books printed for John Hildyard in York, and in 1751, operated as the sole London distributor for a work printed in Bath by Thomas Boddely (for whom Dodsley had also worked as an agent on at least two occasions).

Far from a reputation built on controversial texts, these connections demonstrate Cooper’s influence, which seemingly rested on a shrewd ability to successfully distribute cheaper books, both for and through her extensive business network. Thomas Cooper’s obituary in the Daily Advertiser reported that he had amassed a “handsome fortune” (Treadwell, p.115), and Mary herself came to own at least 18 copyrights, indicating sufficient professional standing to operate with the approval of the London bookselling monopoly. Indeed, her career challenges the perceived position of women in the book trade at this time: Cooper is named on imprints of at least two books in Latin, suggesting she was held in sufficient regard, even as a woman, to sell scholarly works. In a trade that evidently relied on complex business connections and reputation, Mary Cooper was a respected and skilled distributor of various forms of literature, whose professional recognition saw her work in collaboration with – and appear in print alongside – the key London booksellers of her time.

Act of Queen Anne (1710): Introduced a term of 14 years copyright, with provision for renewal for another 14 years if the author was still alive. This act gave authors the rights to their work for the first time, meaning authors could sell their copyright to a publisher and so no longer had to finance the publication of their own books upfront. The act also removed pre-publication copyright, far ahead of other European countries.

Topping bookseller: a seller who bought copyrights and then published and distributed books.

Trade publisher: a term first coined by Michael Treadwell in relation to the seventeenth-century book trade, referring to a bookseller who produced and/or sold books on behalf of their copyright holder.

Carte, Thomas. A letter to the author of the case fairly stated: from an Old Whig. London: Printed for M. Cooper, at the Globe in Pater-Noster-Row, 1745. ESTC permalink: http://estc.bl.uk/T59575.

Clayton, Robert. An essay on spirit, wherein the Doctrine of the Trinity is Considered in the Light of Nature and Reason… London: Printed: and sold by J. Noon in the Poultry, G. Woodfall at Charing-Cross, and M. Cooper in Pater-Noster-row, 1751. ESTC permalink: http://estc.bl.uk/T152757.

Clayton, Robert. A Vindication of the Histories of the Old and New Testament. In Answer to the Objections of the Late Lord Bolingbroke. In Two Letters to a Young Nobleman. London: Reprinted for W. Bowyer, and sold by M. Cooper, in Pater-noster-Row, and George Woodfall, at Charing-Cross, 1752. ESTC permalink: http://estc.bl.uk/T65365.

Dyche, Thomas. A New General English Dictionary; Peculiarly Calculated for the Use and Improvement of Such as are Unacquainted with the Learned Languages… The Third Edition, with the addition of several market towns… London: Printed for Richard Ware, at the Bible and Sun in Warwick-Lane, Amen-Correr, 1740. ESTC permalink: http://estc.bl.uk/T113329.

Sterne, Jacques. The danger arising to our civil and religious liberty, from the great increase of papists… in a charge deliver’d to the clergy of the Archdeaconry of Cleveland in the visitations held at Thirsk, Stokesley, and Malton, in the year 1745. York: Printed for John Hildyard, ; and sold by J. and P. Knapton, in Ludgate-Street; T. Longman, T. Shewell, and M. Cooper, in Pater-Noster-Row, London, 1747. ESTC permalink: http://estc.bl.uk/T190608.

Lancaster, John and Maslen Keith, ed. The Printing Accounts of William Bowyer, Father and Son. With a Checklist of Bowyer Printing, 1699-1777, a Commentary, Indexes, and Appendixes. London: The Bibliographical Society, 1991. Reproduced on Microfiche.