The little red-haired girl who lives on the Hebridean island of Struay, always attired in her welly boots and Fair Isle jersey, is an icon of contemporary Scottish children’s literature. This, of course, is Katie Morag, the much loved creation of Mairi Hedderwick. 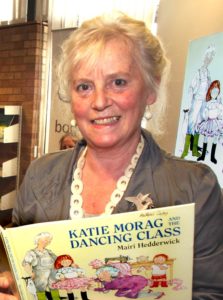 SELCIE was therefore delighted at the news that Edinburgh University had awarded the writer and illustrator an Honorary Degree at a graduation ceremony held at the University of Edinburgh on Monday 27th November. Every one of Hedderwick’s stories opens up a vivid world world for its young reader; in Katie’s companionship, the distinctive culture and heritage of Scottish island life is also brought to life. And Hedderwick’s illustrations also capture a child’s perspective of landscapes, weather, and environment. This striking combination of the visual and verbal was adapted for television in 2013, and a new generation of children discovered Katie Morag in a new medium. 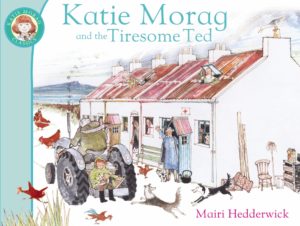 Interestingly, though, the stories didn’t come directly from Hedderwick’s own childhood. The nearest she came to island life was the view through the window of her Gourock home across the Firth of Clyde to Dunoon and the Cowal peninsula: ‘I knew I wanted to go there, across the water and over the hills and far away’, she has remarked. As a student she studied mural painting and ceramics at the Edinburgh Art School (now ECA), graduating in the early 60s. It was an experience that would give her ‘sudden freedom […] It was totally classless […] You had room to develop your personality’. 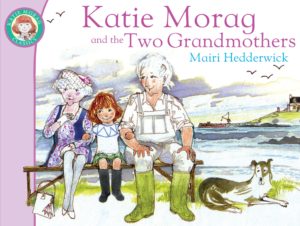 During this time, she first visited Coll, the small Hebridean island lying to the west of Mull and the real-life inspiration for Katie’s island. Working as a ‘mother’s help’ to the laird’s family, she lived without electricity or drinking water but it was still ‘joyous’, she recalls. She subsequently returned and stayed for ten years where she raised a young family and began her career as an illustrator of children’s books by writers such as Rumer Godden and Jane Duncan, and of collections of Gaelic stories and Scottish folktales. Though the family left Coll in the early 70s, its inspiration was deeply seeded, and the first of the Katie Morag series appeared in 1984.[i]

It forms one strand of a rich body of work which encompasses other stories for children (as well as her travel writing which often draws on this rich seam of island experience). Thanks to Hedderwick’s captivating blend of word and image, the material presence of Katie Morag’s world is everywhere — not just in bookshops and television but in cups and calendars. The books belong to the classroom too, and Hedderwick herself is a regular and popular visitor (along with Katie’s teddy bear!) to primary schools and local book festivals; as she herself has said, ‘storytelling [is] a shared activity’. 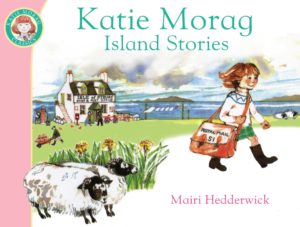 These stories have become an intimate, homely presence in children’s lives — a vital contribution to a longstanding tradition of Scottish children’s writing, all the way back to Robert Louis Stevenson and A Child’s Garden of Verses, which so memorably captures a child’s view of the world. And, happily, that tradition is still flourishing across the  diversity of contemporary Scottish children’s literature, and the small, independent publishing houses which so often nourish and sustain it.

Share on TwitterShare on FacebookShare on PinterestShare on LinkedIn