Sometimes amazing wonders can be found in the most unexpected places. A few weeks ago the Museum of Childhood book collection revealed to us a treasure hidden within a tiny book in a box filled with other tiny books, within an even larger box initially thought to contain only magazines. It seems it was the proverbial needle in a haystack.

The book in question is ‘a child’s birthday book’, as explained in the note left inside by a Mrs Golding, who donated the tiny treasure to the Museum of Childhood. What makes this book truly remarkable, however, is a signature found inside for the 10th of December – George MacDonald. 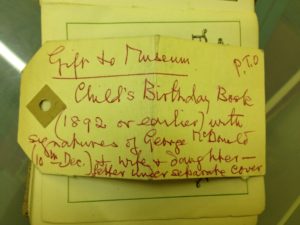 The note inside the Birthday Book

George MacDonald (1824-1905) was a famous Scottish poet and novelist who greatly contributed to the field of fantasy literature, so at first it was difficult to believe his signature could be found in a child’s birthday book. The whole team tried very hard to contain their excitement. However, after the comparison made with some examples of MacDonald’s other autographs, the signature could positively be identified as his. 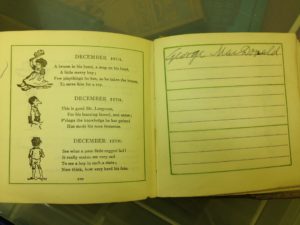 The signature of George MacDonald

This is a truly exciting find both for the Museum of Childhood and SELCIE, and it brings hope that all literary treasure that is hidden, even in the tiniest of books, can one day be found. Keep your eyes peeled for more information about this exciting find – we just couldn’t resist sharing it with you now!

Share on TwitterShare on FacebookShare on PinterestShare on LinkedIn