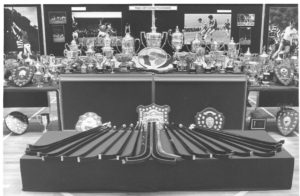 In the year when the art of making a caman or shinty stick was officially designated “critically endangered” the 2019 Dr Johnnie Cattanach Memorial Lecture at the Highland Folk Museum, focussed on the art and history of making the caman.

The caman is, along with the ball, the most important element in any shinty match and has, over the centuries, undergone little change in terms of its fundamental shape. There have been subtle and important variations though in terms of the shape, size and head.

Over the 125-year history of the Camanachd Association, the caman is one of the least regulated parts of the sport. While making the caman has of necessity been a matter of craft, the history of stick manufacture, however, has been subject to significant external influences which have radically altered the way camans have been made and finished. Not the least of these influences has been the simple scarcity of satisfactory wood.

The caman was described in a late 19th Century newspaper article as “an elegant weapon, graceful to wield, and of delightful capacity for hacking an opponent’s head, or elevating his knee-cap”. The caman has been to war and weddings, funerals, featured in court cases (including a murder in Argyll) and international matches, and is now recognised as one of Scottish sport’s most recognisable iconic images.

Camans have been used to commemorate the passing of playing and club legends; they have at times, gone from the sublime to the quite frankly slightly ridiculous. They have been presented to Kings (probably, but certainly the Duke of Edinburgh) and queens – Miss World; Royalty, Prime Ministers and sporting icons. There is also an argument, in fact, that some of our greatest prizes, the silver-mounted caman, have been distributed well beyond their initial careful intention, as devised by the great John Macpherson and the Sporting Stores in Inverness, of being solely awarded to the winning captain in the Camanachd Cup Final.

The caman (the Gaelic for a shinty stick which also had a “bas” – foot and “cas” – handle), has, over time, been made of birch, beech, ash, hickory or any other piece or combination of timbers; from one-piece “naturals” to laminated boards, all with the common aim of defining and achieving that elusive sweet-spot; various man-made materials have been postulated and even tried, from aluminium to fibre-glass – yes seriously – and various forms of plastic. In the Western Isles stiff pieces of seaweed known as stamh were pressed into service along with all sorts of flotsam and jetsam – until the sheer lack of trees on the islands did for shinty until relatively recently.

Camans have been treasured possession and life-long friends, cared for lovingly, and in their silver-mounted versions, regarded as being one of the most highly prized honours in the sport. A shinty club can be an item of real beauty; its shape, feel and balance exquisite; made of the finest timber, it can be, for sure, elegant and graceful to wield, and yes, as we all know, it can be mis-used and abused as well.

The finest camans are the sporting equivalent of a magic wand – not unlike a snooker player’s favoured cue – an extension of an exponent’s physique and personality. And we have many great images and photographic evidence to prove it.

They have featured in the design and items jewellery from kilt-pins to necklaces; they have been the subject of debate in Parliament with various attempts being made to remove VAT from the cost; they now cost around 50-60 pounds where they once, in my day, cost shillings and sixpence.

They are rarely thrown out and most shinty playing homes have the wreckage of a player’s career somewhere in a garage or a loft. They have never, to date, been cited as evidence in a divorce case, but the possibility is not to be dismissed. “It’s me or that pile of sticks in the garage” is not an unknown refrain.

One of the most often rehearsed debates in shinty is about the quality of the sticks – and the balls – similar in fact to the wider perennial debate about standards of play, collectively and individually. The universal and unchallenged opinion is that players today are not as good as they once were; the game is not so good, traditional skills are rare; “so and so” makes a better stick than “so and so” does or did.

Camans have been subject to reports about their demise for many years; the Highlands and Islands Development Board in 1981 commissioned a report on the supply of camans and balls. They have been gathered and displayed in exhibitions such as the Shinty Forum in 1974 and Hampden 2015. They have been tested to, and beyond, destruction all with the aim of establishing the indefinable qualities of shape, weight, balance and feel.

The history of the making of shinty stick production has gone through numerous stages from the point they were made by the players who used them. From branches cut from trees locally, they reached a point where they have been made in a process of more or less industrial scale.

Organisations such as John Macpherson Sporting Stores (arguably the most important in the history of the sport), Willie Munro and then John and Mabel Sloggie (also hugely important in terms iof continuous supply), Rivdal, Prolam, Leisuropa, Heron, Tanera, Treecraft, have been matched if not in terms of scale, then in terms of skill, ingenuity and craft by the likes of Neil Blair, George Mead in England, Billy MacLean, Hughie Buchanan, Dod Macpherson and Jack Buchanan – that list is not definitive and is virtually endless. The companies and various individuals’ efforts to make camans, have often helped keep the game alive in Highland communities. In the case of John Macpherson and John and Mabel Sloggie they certainly stood between survival and the game grinding to a halt.

A number of Museums, principally the Highland Folk Museum in Newtonmore and the Clan Macpherson Museum hold a significant number of camans, old and new. It is now time for some mechanism to be developed to display these to followers of the game, players and those who are fascinated by the beauty and heritage of sporting implements.

Every shinty stick has a story to tell and some of these are well documented in Gaelic and English, in works of great scholarship, newspaper columns and in oral form through recordings and video. 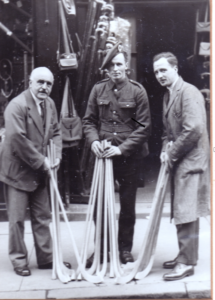 Shinty should have a way of highlighting the importance of the caman and stick-makers and paying tribute to its finest exponents. These thoughts may go some way towards galvanising everyone into achieving such a valuable and significant outcome.