In celebration of International Women’s Day on March 8th, our blog this week is the

first in a series on the unmarked contributions of early women writers to the history of Scottish children’s literature. Today it’s the turn of the prolific Jessie Margaret Edmonston Saxby (1842-1940) who transposed the Victorian boys’ adventure story to the Shetland islands, where she was born, and invented beautiful worlds of fairytale wintriness in her poetry and short stories for younger children… 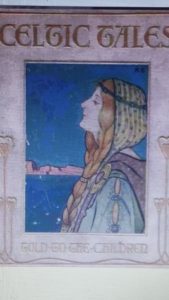 J.K. Rowling is the inheritor of a neglected tradition. From the early nineteenth century onwards, women have written children’s literature in Scotland but their books, and their lives, have largely been forgotten. Scottish women have also played a significant role as the illustrators and designers of children’s books —  Jessie M. King (1875-1949), for example, who created images for Oscar Wilde’s fairy tales, among many other works of fantasy and fairytale, or the less well-known Katherine Cameron (1874-1965) who produced illustrations for Charles Kingsley’s The Water Babies as well as for collections of Celtic ballads for children. And for centuries, of course, they have been the transmitters and inheritors of oral tradition and its wealth of ballads and folktales who are occasionally remembered as the nurses, (grand)mothers, or sisters acknowledged by nineteenth century folktale collectors and antiquaries. Robert Louis Stevenson was grateful to his nurse Alison Cunningham for sharing her storehouse of stories and lore. 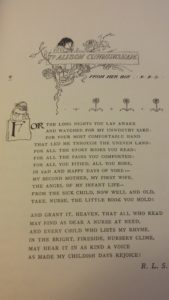 RLS dedicated *A Child’s Garden of Verses* to Alison Cunningham, who nursed him as a child

Scottish women writers also played a role in the emergence of the literary fairy tale in print at the turn of nineteenth century in Britain (as opposed to the longer chapbook tradition or transcribed collections of folktales and ballads). Catherine Sinclair (1800-64), for example (who has a commemorative monument to her in North Charlotte Street in Edinburgh) published Holiday House. A Series of Tales in 1839.  This was innovative in its presentation of two orphaned siblings as ‘two of the most heedless, frolicsome beings in the world’. Harry and Laura (who is Alice-like in her insatiable ‘curiosity’ for things) are often disobedient, unruly, and untidy —  but their wholly child-like spirit for play and freedom is not chastised in conventional moralistic fashion. Even the fairy tale encased within the realist narrative is wry and funny and dark at the same time.

And because equality is not just for one day, SELCIE will be introducing many more female poets, novelists, short-story writers, and artists for children as we work towards our 2018 exhibition! END_OF_DOCUMENT_TOKEN_TO_BE_REPLACED

‘A little wee elf in coat of green / Dwelt in a tree so gray, / In the tiniest house that ever was seen, / Lit by the things that might have been, / And the light of yesterday’.[i]

This poem was written by a young girl called Helen Douglas Adam when she was between the ages of ten and twelve. Born in Glasgow, raised in Dundee and, for two years a non-matriculated student at Edinburgh University, she grew up to become a radical literary figure on the San Francisco Renaissance scene. Helen Adam’s life is a little like a fairy tale of a slightly surreal kind; but both she, and her work, have remained rather a well-kept secret.[ii] We discovered a copy of her first published volume, The Elfin Pedlar & Tales told by Pixy Pool (1923), whilst unpacking one Thursday afternoon in the Museum of Childhood’s book-vault.