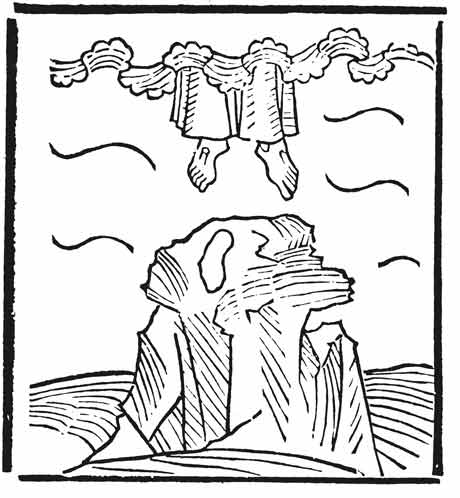 In celebration of Ascension Day, one of my personal favourites in the Christian calendar, here is an excerpt from a wider piece I’ve been working on, exploring the challenges from science (“Science, Scripture, and the hermeneutics of Ascension”).

In the hermeneutical exercise that we are proposing, the imagery employed is of central importance. The scriptural witnesses to the ascension of Jesus invariably couch it in spatial terms, most obviously in Luke-Acts (Luke 24:50-51; Acts 1:6-11), where Jesus is ‘carried up’ into heaven on a cloud. The other synoptic Gospels do not describe the ascension (except in one of the alternative endings to Mark – 16:19), and it is a moot point whether they even know of the idea as such; on the other hand, their talk of the Son of Man coming again on the clouds (e.g. Mark 13:26) is compatible with the idea that this is how he went in the first place. The idea of ascension is represented in various other places in the New Testament through talk of the final ‘leaving’, or ‘going up’ of the earthly Jesus after the resurrection (e.g. John 20:17; 1 Tim.3:16), or of his heavenly exaltation, where Jesus sits at God’s right hand (e.g. Rom.8:35; Eph.1:20; Heb.1:3; cf. Ps.110:1).

The interpretative challenges presented by this spatial imagery are extreme, and Luke’s ascension passages in Luke 24 and Acts 1 present them in their sharpest form, which is why we shall focus on them in this article. Luke paints the ascension as the final chapter in the seamless narrative of the earthly Jesus, as a concrete historical event in our time and space. More to the point, Luke paints the ascension as an event that appears to involve a space journey to a geographical destination in the universe called ‘heaven’. The literal impossibility of this scenario from the Newtonian perspective means that many of us prefer to brand Luke’s ascension as ‘metaphor’, although the fantastic qualities of this journey in fact take it beyond the category of metaphor. There has been extensive discussion of the precise meaning of the term ‘metaphor’ in the science-religion field, and of its relationship to ‘analogy’ within the critical realist view (e.g. see Gerhart 1988 versus van Huyssteen 1988). It is sufficient for our purposes to point out that a metaphor generally works by being rooted in earthly terms: it is a means for us to frame a concept beyond our grasp through the terms of a concept within it. From that point of view, the phrase ‘Jesus went away on a long journey’ (cf. Luke 19:12) might qualify as a metaphor of the ascension, while ‘Jesus went up to heaven’ does not qualify in any clear sense as a metaphor, since ‘heaven’ is a location entirely beyond our ken. Consequently, Luke’s narrative of the ascension, whatever else it may be in terms of genre, is not obviously metaphor as a whole, although it contains metaphorical components. This is a subtle but important point: our Newtonian presuppositions might prevent us from a ‘literal’ reading of the text, but by the same token the text does not allow us to take refuge in the blanket category of ‘metaphor’.

A related but equally problematic tactic for accommodating the ascension to modernist scruples is to assume that Luke’s narrative was a hostage to the fortune of his times, and operated within a primitive cosmology where heaven really was considered a concrete place ‘up’ in the sky. That is as it may be, but Luke actually possesses more sophistication than he is often given credit for, not least because the ‘heaven’ to which Jesus ‘ascends’ was just as out of reach for Luke as it is for us today, whatever the details of his cosmological views. And we should not forget that the Newtonian cosmology which informs our own gut-instincts about Luke’s ascension story has itself been made obsolete by advances in physics over the last century, advances that present many outlandish challenges of their own to our ‘common sense’ view of the universe, especially if such a ‘common sense’ view is in fact the Newtonian view where the universe is infinite in extent, deterministic, and contains all that there potentially is. We shall expand on this shortly. In any case, close examination of Luke’s most detailed ascension text in Acts 1 indicates that it possesses something of a visionary dimension, which neither the ‘literal’ nor ‘metaphorical’ approaches to the text are able fully to apprehend. Detailed discussion of this point is beyond the scope of this article, but the essence of what we are saying is that Luke’s story intentionally articulates a mystery in spatial and visual narrative categories, a mystery which is not easily boiled down or demythologised into an easily-digestible ‘grand idea’ or kernel, especially one amenable to science.