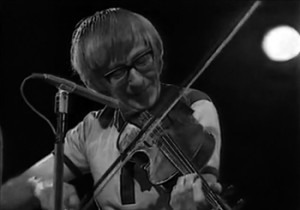 Davy died on 28 December 2014 aged 92. The following was published by his friend and musical colleague Jack Beck on 31 December 2014:

“Davy first came into my life in the mid 1970s when he was in his early 50s and I was in my 30s. I was at a party in his house when I discovered that he had been a fiddle player as a youngster, but hadn’t kept it up. But he got out his violin and we found we could play a few tunes together.

The very first time I persuaded him to get up and play at the local folk club not long after that first party, he prepared to play the first note and promptly fainted. Half an hour later he got back up played like nothing had happened. A few years later he joined a group of us to create ‘Heritage’.His favourite place, after Fife, was France. He famously spent 6 months there after Heritage broke up and wound up as guest fiddle player with the Occitan group ‘Los Cotillons de Tonniens’ touring all over the country with them (in costume) playing all the tunes he’d fallen in love with when Heritage had toured there many times.Heritage spent 15 years playing traditional Celtic music at folk clubs, festivals, concert tours, radio and TV all over Scotland and Europe; Davy was an integral part of the front line for much of that time. By profession he was an internationally recognised artist with work hanging in prestigious collections all over the world, as well as a much loved art teacher in a Fife High School who certainly influenced his pupils very much for the better. But he often said that his musical career saved his sanity from the bureaucracy and politics of the Scottish education system.

During our travels with Heritage the stories about him abounded – from his terrible driving to his ability to fall asleep at the dinner table. He would be the first to admit that he wasn’t a great fiddle player – and yet – he helped establish the sound of the group and that didn’t change much despite various personnel shuffles over the years. The other great stories were the ones that he told – like the time he joined the Home Guard so he could have a rifle to shoot the capitalists when the war was over, and on, and on –

I consider myself lucky to have known him and to have had him as a friend.”

This obituary by Joyce McMillan was published in the Scotsman on 10 January 2015:

On 6 January, almost 500 people gathered at Kelty Kirk, in Fife, to celebrate the life of David Lockhart, artist, fiddle-player, and – in the words of one of his former pupils at Ballingry Junior High School – “the best teacher that ever lived”.

It was an extraordinary tribute to the enduring legacy of a man who was 92 at the time of his death, but who remained deeply engaged in the worlds of art, music and local politics well into the final decade of his life, and is remembered with great affection and joy by thousands of former pupils, colleagues, friends and fellow-artists.

The singer Sheena Wellington, who knew him well as a much-loved fiddle-player on the traditional music scene, describes him as a “true Renaissance man, but without the pretensions. Davie Lockhart could talk to you about anything and everything that mattered, far into the night. But he had this lightness of touch and lovely smile that meant it was always fun, and a sheer delight to spend time with him.”

David Lockhart was born in Leven, Fife, in 1922, the son of a coalminer in a decade when the mining community in Fife was to undergo poverty and deprivation on a shocking scale. When David was four, in the year of the General Strike, his mother died in childbirth, giving birth to David’s younger brother Jim. His widowed father moved to Cowdenbeath, in order to be closer to his own parents in Crossgates, where David went to primary school.

Yet despite the severe poverty the family endured, David’s socialist father was ambitious for his three children, and encouraged them to focus on their education; and after secondary school at Beath High, David won a bursary to study graphics and illustration at Edinburgh College of Art.

Together with his Fife friend, the illustrator Willie McLaren, he was a student in Edinburgh throughout the Second World War; David made several attempts to join the armed forces, but was rejected on the grounds of his puny, undernourished physique, and a brush with childhood tuberculosis.

He and Willie drew, painted, made theatre, and undertook some artistic experimentation involving a type of magic lantern called an epidiascope. Their wartime escapades also included fire-watching on the roof of an Edinburgh rubber factory, where they painted the walls with giant murals of the biblical story of the creation; when their efforts were discovered, they were severely reprimanded, and ordered to paint over the lot.

At the end of the war, the two friends jointly won a travelling scholarship which enabled them to spend a year in London, under the supervision of the great illustrator Joan Hassall.

And for a few years, David Lockhart earned a scanty living as a young designer, working at the Royal Museum of Scotland, and on the lettering for the Robert Bruce statue at Bannockburn.

In 1948, though, while strolling up Cowdenbeath High Street, he met a young Inland Revenue clerk called Jean Bain, invited her for a coffee, and told his family later the same day that he had met the woman he would marry.

In an effort to secure an income that would support a family, he trained as a teacher; David and Jean were married in Kelty in 1951, and shortly afterwards David became head of the art department at Ballingry Junior High School, a post he was to hold, and love, until his retirement more than 30 years later.

Always intensely interested in politics, David left the Communist Party in 1948, but remained a devoted trade unionist, while Jean became a leading Labour councillor and local activist in Fife.

In 1979 he finally joined the Labour Party, and remained a member for the rest of his life; as recently as September, he and Jean were locked in debate over the independence referendum, with David leaning towards No, Jean towards Yes.
Throughout his long teaching career, though, David Lockhart sustained his work as an artist, becoming a member of the Royal Society of Watercolourists, and sitting for many years on its hanging committee.

He and Jean had three children, and through his family life and his work as a teacher, he became fascinated by the opportunity to see the world through the eyes of children and teenagers, by the way they used colour, and observed social change.

His paintings can be found in collections throughout Britain, and across Europe and America; for Ballingry Junior High, he painted a mural called Many Mansions, based on the biblical text, which can now be seen in the entrance of Benarty Primary School in Fife.

And although he enjoyed, in his own words, “playing a bum traditional fiddle to correct the neurosis of painting”, painting remained his first love, even when he joined the 1970s folk group Heritage. Later, after his retirement, he began to spend part of each year travelling the highways and byways of Europe, as a kind of strolling fiddle player.

As recently as 2012, David Lockhart undertook an artist’s residency at Hospitalfield Arts Centre in Arbroath, to mark his 90th birthday; and a few months ago, he submitted his final two pictures to the Royal Society of Watercolourists for inclusion in their annual exhibition, which opens on 16 January.

David Lockhart is survived by his wife and soul-mate Jean, by his three children Mary, Peter and Jean, by three much-loved grandchildren, and by a great-granddaughter, Chloe.

His is a legacy, though, that also extends far beyond his family, to thousands in Fife and across the world who were touched by a life that was, from first to last, a tribute to the restless human capacity to imagine our way out of difficult circumstances, to work to transform the society around us, and to keep learning, changing, creating and connecting, to the very last.

“The truth is that he just loved people,” says his older daughter, the journalist and campaigner Mary Lockhart, “and they loved him back.

“I recently moved back to Ballingry, where he taught; and now, people will just arrive at the door, asking if they can walk round and look at his paintings, and talk about their memories of him.

“And on Hogmanay, we had exactly the kind of party he liked best. We ate, and drank, and played lots of music, and talked about him, and looked at his paintings, and talked some more, setting the world to rights. Which was what he would have wanted; and what he loved, right to the end.”

The following photographs are ‘borrowed’ from the web pages of Hospitalfield, Arbroath and record Davy’s return residency there in 201 . Davy was previously a student at Hospitalfield from July to September 1944. Permission to use the photographs was sought by email but no response received. 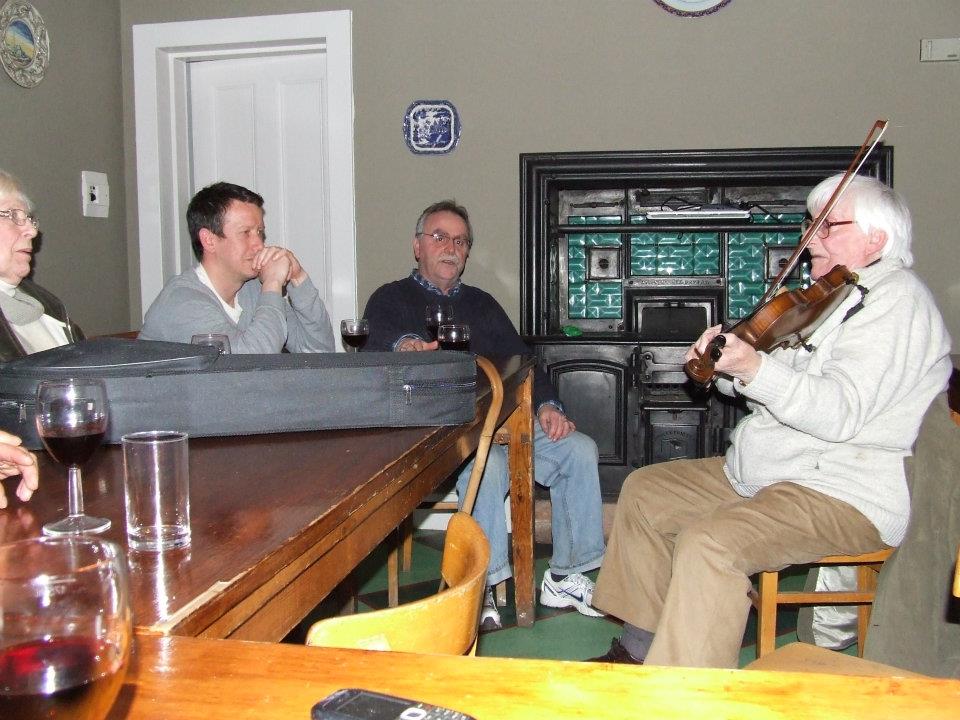 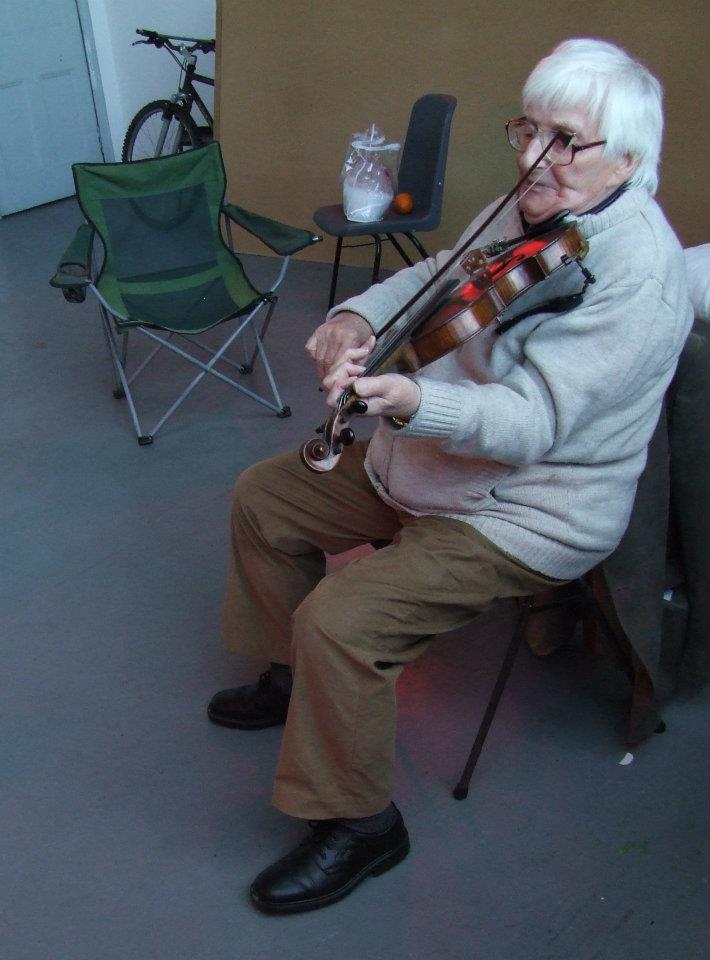 The full Heritage discography is published in Nigel Gatherer’s website.

…inspired by the recent revival of the Scottish cauldwind or bellows pipes. Davie Robertson is one of the most accomplished traditional artists to be connected with the revival and this collection of his work is long overdue. His masterly small pipe accompaniments, his richly authentic East Lothian Scots and the refreshing vitality of his own song compositions offer the best of the on-going tradition of Lowland Scotland. The blending of old and new is completed by the sets offered by Andy Hunter (small pipes), Davy Lockhart (fiddle) and Mike Ward (small pipes and harmonium). (Scots Language Society) 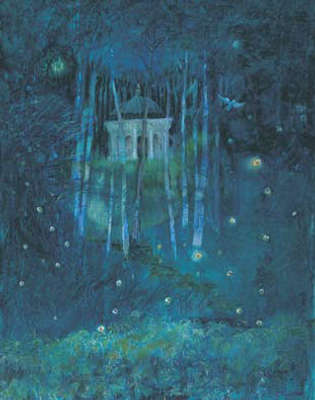 Nor in my marble tomb  D. Lockhart

Davy’s role as an artist is covered in his entry in his Royal Scottish Society of Painters in Watercolour member page.

He was a member of the Fife folk group Heritage. The origins of the band are recorded by Jack Beck:

Dunfermline had been home to a series of very successful folk clubs since the very early 1960s including the Howff, Belleville, Green Tree, Kinema Ballroom and City Hotel clubs. When the latest one (the City Hotel) closed in early 1975, the network of folk enthusiasts which was left homeless included highly accomplished singers and musicians as well as highly committed fans. Among those were Jack and Aileen Beck, Jimmy Dunn, Lindsay Porteous, Archie Todd, Mike Ward, Davy Lockhart, George Haig, Mike O’Connor, Mike Mustard, Mark Milligan, Tam (the bam) Flanagan and Jean Gardiner.

The get-togethers in the Brig Tavern which began simply as an opportunity to stay in touch and continue to enjoy the music socially, fairly quickly evolved into an unspoken ‘self-help’ group which definitely tried to break down barriers between performers and non-performers. Amazingly, there was one early occasion when almost everyone who would eventually play as part of Heritage in the subsequent 15 years was in that upstairs lounge (Jack Beck, Lindsay Porteous, George Haig, Mike O’Connor, Mike Mustard, Mark Milligan, Jimmy Dunn, George Duncan, Pete Clark, Mike Ward and Davy Lockhart).

Of the player’s music