During my Erasmus+ visit to Bulgaria last week I failed to hear any live gadulka playing due to the busy schedule. Nevertheless, I did encounter the instrument in a number of museums (below) and even on brooches in souvenir shops (above). What became clear is that the gadulka comes in a number of different flavours in terms of name, size, strings (some have sympathetic strings as well as the standard three), and tunings, although one form is now the standard.

I read in Grove that the first (highest) string is played by touching its side with the finger nails (as with the Cretan lyra) and that the other two strings are pressed from above but not right down to a finger board. 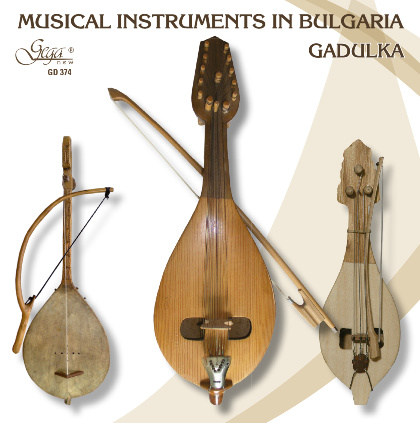 I picked up a great CD called Musical Instruments of Bulgaria – Gadulka which has some interesting, if sometimes fanciful, liner notes. I’ve made a selection of my three favourite tracks using Spotify. In each it is possible to imagine how Scottish traditional music might sound on the instrument – I think it would be highly viable. Dobroudjanska Ruka is popular dance (see it danced on YouTube). It is played here by gadulka, bagpipe and accordion in unison. The slow tunes in the other two tracks remind me somewhat of the playing of Irish maverick fiddler Tommy Potts, which I love.

Mincho Nedyalkov’s final jig would not be out of place as a theme in a Celtic Connections New Voices commission.