This may be yet another portrait of Niel:

William Smellie Watson (1796-1874) was a decent portraitist based in Edinburgh and I suspect he would not have wished to copy the famous work by Raeburn, who had been a rival of his father George Watson (1767-1837). I have found no listing of this portrait.

And what of this pair of portraits, father and son?:

I was intrigued by this portrait used to advertise the recent 250th Anniversary Tribute to Nathaniel Gow (1763 – 1831) held in Edinburgh. Unfortunately I was unable to attend and I have not got round to asking anyone who should know but I wonder where the image came from and where the original resides. I had forgotten about it until I came across the following news report from The Dundee Evening Telegraph, 26 September 1929 (10):

Now, unless subject to some really serious Adobe Photoshop work, the image used to advertise the concert is, as they say in Glasgow “nae oil painting”. I looks to me like a coloured lithograph although that effect could occur if a poor photograph of an original image has been processed to make it reproducible.

The Oxford Dictionary of National Biography (Christopher D. S. Field, ‘Gow, Nathaniel (1763–1831)’, Oxford Dictionary of National Biography, Oxford University Press, 2004 [http://www.oxforddnb.com/view/article/11167, accessed 15 March 2015) quotes McGregor (J. McG. [J. McGregor], ‘Memoir of Nathaniel Gow’, in A collection of airs, reels and strathspeys, being the posthumous compositions of the late Niel Gow (1837), 4–7) who says that “a spirited likeness” of him was painted by John Syme. Is the image above ‘spirited’? It is noted that the painting, in oils, by Syme was “untraced since 1837” but there is also a reference to a “photolithograph, 1895, reproduced in Glen” which is, presumably, J. Glen, ‘Nathaniel Gow’, The Glen collection of Scottish dance music, 2 (1895), x–xiv in the list of references. G. S Emmerson, Rantin’ Pipe and Trembin’ String. (London, 1971) and M. A. Alburger Scottish Fiddlers and their Music. (London, 1983) both include grayscale images similar to that above. I have not examined Glen but it might carry an artist, or lithographer’s name.

So, it looks like the original oil painting is lost (let me know if I am wrong here) but that it might have still been around in the late 1920s. And what of the Niel Gow? Could that be the painting in the collection of Perth and Kinross Council?

Of further interest is the reproduction in the Dictionary of National Biography of youthful drawing of Nathaniel playing fiddle by John Kay said to be from the National Portrait Gallery (i.e. London, I presume). That’s a wholly new one to me and a real cracker.

Many years ago, while researching the free-reed instruments in Scotland, I stumbled upon a number of references from the early twentieth century to criminal activity (theft, drunkenness, breach of the peace etc.) involving the accordion and was struck by the large number of cases in and around Dundee. Why Dundee? It would appear that the accordion was not the only musical instrument implicated in such activity and that fiddlers were, and associated with, an unsavoury lot:

Vault was an old part of the town that had attracted the eye of many artists and photographers before it was redeveloped. In the painting of the site reproduced above and below I was delighted to find both a melodeon and a fiddle player:

More posts will follow on violin crime and on fiddlers in Scottish art in due course.

This well made outsider view of Scottish tradition for Web TV is well worth a look. Fiddler Sarah Hoy makes an appearance about 15 minutes in. A few other familiar faces in there too. 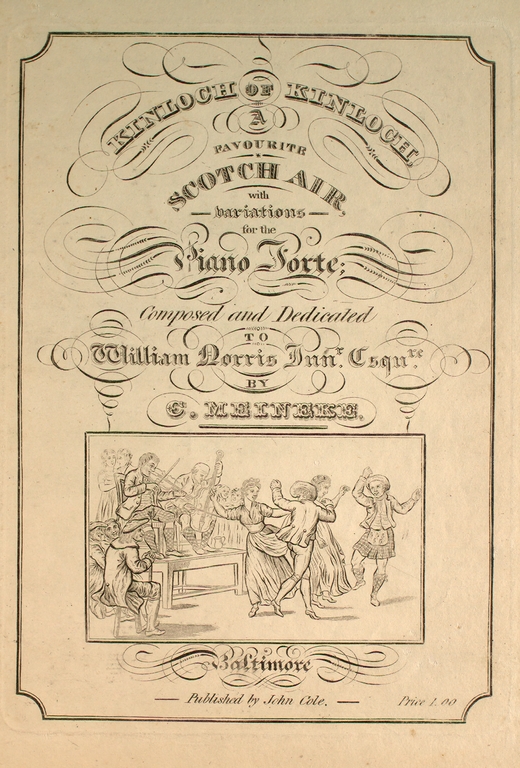 The National Trust for Scotland recently found some printing plates for a keyboard setting of the popular Scottish tune Kinloch of Kinloch in one of its historic properties. Research is ongoing into the music they contain. I had a quick look for other piano settings and found this lovely title page from the Levy Sheet Music Collection at the Milton S. Eisenhower Library of The Johns Hopkins University. This is a very interesting collection beautifully presented online. Focused on on popular American music spanning the period 1780 to 1960 there are many pieces of Scottish origin which can be located via the search facility. Others have illustrated covers and I am particularly taken by the cover of this publication from Philadelphia: 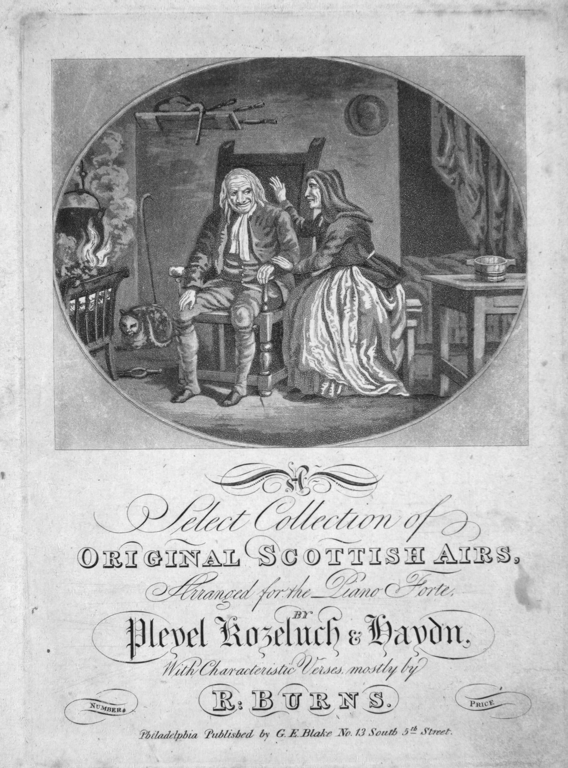 Just what I need:

The Modern Musick-Master, or, The Universal Musician. Containing, I. An Introduction to singing, after so easy a Method, that Persons of the meanest Capacities may (in a short time) learn to Sing (in Tune) any Song that is set to Musick. II. Directions for playing on the Flute, with a Scale for transposing any Piece of Musick to the properest Keys for that Instrument. III. The newest Method for Learners on the German Flute, as improv’d by the greatest Masters of the Age. IV. Instructions upon the Hautboy, in a more familiar Method than any extant. V. The Art of playing on the Violin; with a new Scale, shewing how to stop every flat or sharp Note, exactly in Tune, and where the Shifts of the Hand should be made. VI. The Harpsichord illustrated and improved, wherein is shewn the Italian Manner of Fingering, with Sets of Lessons for Beginners, and those who are already Proficients on that Instrument and the Organ; with Rules for attaining to play a Thorough-Bass. In which is included, A large Collection of Airs, and Lessons, adapted to the several Instruments, extracted from the Works of Mr. Handel, Bononcini, Albinoni, and other eminent Masters. With a brief History of Musick, wherein is related the several Changes, Additions, and Improvements from its Origin to the present Time. To which is added, A Musical Dictionary, explaining such Greek, Latin, Italian and French Words as generally occur in Musick. Curiously adorn’d with Cuts, representing the manner of performing on every Instrument. Finely Engrav’d on above 320 Plates. Engrav’d, Printed, and Sold at the Printing-Office, in Bow Church-yard, London. Price 7 s 6 l . Where may be had Books of Instructions for any single Instrument , far exceeding any others extant. Price 1 s. 6 d. N. B. You are desir’d to take Notice, That the whole Volume and Books of Instructions for any single Instrument are printed in Royal Octavo , which is different from any other of that kind yet publish’d.

No sooner had I posted the previous lines on Raeburn’s Niel Gow portrait when someone send me details of this likeness. It will be a few weeks before I can confirm the names of the artist and publisher. Now, I don’t recall having seen this image before but I like it very much. Why, I wonder, is Niel portrayed in familiar pose without his famous fiddle?

Duncan MacMillan in his excellent ‘Old and Plain: Music and Song in Scottish Art’ in Edward J. Cowan The People’s Past (Edinburgh, 1980) wrote that “Raeburn made his masterpiece the portrait of Neil (sic) Gow playing his fiddle” (p.131) and suggested that “…the real potential of the conjunction of painting and the traditions of folk music was declared… in a single picture by… Raeburn in his portrait of Neil Gow.” (p.137) He went on:

This was painted in 1806. As a portrait the only rivals it has from its own time are in the work of Goya and David. It shows the fiddler seated, dressed in his customary check trews and absorbed in music. The strength, simplicity and directness of the image, and the painting of it, are not only a just comment on the man, but also on his music. Here there are no Italian tricks, and in place of artificiality, which was the dominant characteristic of contemporary portraiture elsewhere, the image is utterly concrete. Its dignity derives from the artist’s respect for the individuality of his sitter. Through Neil Gow, Raeburn has given visible form to the qualities in the popular tradition from which Fergusson and Burns drew strength. Beside this portrait his nearly contemporary portrait of Scott seems strangely ambivalent. (137)

Elsewhere MacMillan wrote of the painting:

…it derives its strength as an image first of all from its simplicity. The musician is quite alone against a plain background. His costume is simple and there is nothing demonstrative in pose or gesture. His expression is withdrawn as he is absorbed in his music. It is a natural portrait of an unselfconscious artist, but the qualities of natural simplicity and strength apply to the music as well as to the man. He becomes therefore a personification of popular music as it is presented in Allan’s pictures at much the same time – Gow’s portrait was probably painted no later than 1793.” (Duncan MacMillan Painting in Scotland. The Golden Age. (Oxford 1986), p. 74.)

There are a number of version of the portrait (perhaps as many as eight) and it was also the subject of an engraving (1809) and a mezzotint (1816) (see below) that saw it hung widely on the walls of Scots both at home and abroad. There is one version in the collection of Perth and Kinross Council (Accession number: 4/188) and, of course, one at Blair Castle.

In the nineteenth century, multiple versions in imitation of original oil paintings were produced (by oleograph or some other means) and sold for the popular market. I suspect these appeared after the painting was acquired by the Scottish National Portrait Gallery in 1886 and were offered in Edinburgh and at Dunkeld. Many of these inexpensive reproductions survive and my favourite is this charming, folksy one which may be either an original painting or an oleograph over painted:

The Portrait Gallery painting was cleaned (in the 1990s?) when its appearance was “dramatically changed” (Duncan Thomson, Raeburn, (Edinburgh, 1997), p. 106.) and curators have ensured it has been given prominence in gallery re-hangings ever since. It is available to take home on postcards and notebooks from the gallery shop. This re-engagement with the portrait coincided with the modern revival of interest in Scottish fiddle tradition and musicians have managed to make visual as well as musical links to Gow through photographs used on record sleeves and in film.

It is no surprise, therefore, that the First Minister should choose, or be persuaded to agree, to have the Gow painting as the backdrop of the recent portrait by Gerard M. Burns. In doing so she sends a clear message designed to link her back to the culture of the Scottish people and its historical and artistic past. For me, there is a strange contrast in the pose and attitude in the two figures in the painting and there appears to be some strange work in the lower parts of the Raeburn that are really quite dark in the original . That said, I wonder what our art real commentators will have to say.

It is interesting to note that after the National Galleries of Scotland version left the hands of Raeburn’s son Henry in 1861,  it was acquired by a Mr Salmond of Glasgow.