On October 25, as part of the Center for the History of the Book Seminar series at the University of Edinburgh, Prof. Wilson Poon presented “The most beautiful book in Scotland: Regime change, Reformation and Rebellion.”  The billing did not disappoint.  The manuscript presented was magnificent. 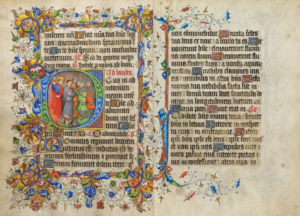 This is a book of hours created in the south of England in approximately 1430.  A book of hours is a devotional book common in the middle ages that contained prayers that the laity could recite throughout the day following the cycle used in religious houses.  As is typical, this manuscript begins with a calendar of feast days of the church (Christmas, Easter, commemoration of saints, etc.). 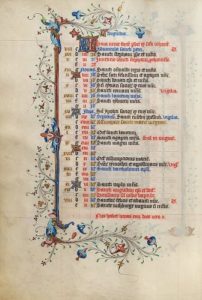 As with all manuscripts, the text is hand-written and the artwork is also done by hand.  Each page is brightly illuminated with borders made up of flourishing and feathering.  Each of the 282 pages are vellum (animal skin, shaved and stretched).  The manuscript is housed in the Edinburgh University library where it has the shorthand reference MS 39.

Prof.Wilson Poon of the School of Physics presented the book and discussed aspects of it including an extended conversation of the manuscript’s provenance.  It has not been conclusively determined who first commissioned the work.  It is clearly an expensive production and experts consulted by Prof. Poon agree that it was made in England in the early fifteenth century, yet its history is still incomplete.  Prof. Poon is working to solve the outstanding questions. 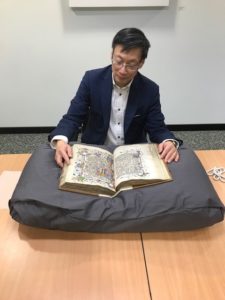 An interesting aspect of the text involves the calendar pages that follow the initial.  Any reference to the pope or St. Thomas of Canterbury are erased, some more effectively than others.  This indicates the book was produced before the “reforms” instigated by Henry VIII in the early 1500s.

Annotations within the book provide further clues as to part of the provenance path of the book.  There is an inscription on the front flyleaf that reads Franciscus Bodley natus fuit in anno domini millesimo quingentesimo trecesimo secundo (Francis Bodley was born in the year of our Lord 1532).  It’s unclear if the inscription was made contemporary with the birth, but it would strongly suggest it.

Another interesting annotation is birth information of 14 members of the Babham family stretching from 1451 to 1474.  Again, it is unclear if the dates were entered contemporary.  Prof. Poon pointed out that there are two hands involved in entering the details, with a substantial part of the second set apparently entered at one time. 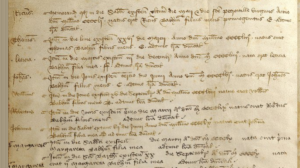 Professor Poon’s presentation was well-attended and well-received.  The manuscript is luxurious and indeed most likely “the most beautiful book in Scotland.”  The associated provenance discussion given by Professor Poon was fascinating as he presented his clues, research, and conjectures.  All attendees look forward to updates as he continues his investigations. 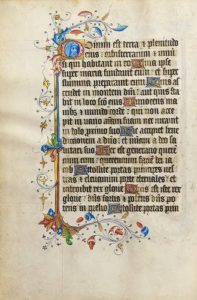