This week marks seventy-five years since the publication of the Beveridge Report. The report provided a vision of a National Insurance scheme which would provide people with sickness and unemployment benefits, retirement pensions, widows’ pensions and industrial injuries payments, in return for the payment of national insurance contributions. Today there is much discussion of what has been lost since Beveridge’s vision of a welfare state which would slay the five giants of ‘Want, Disease, Ignorance, Squalor and Idleness’. And rightly so. Seventy-five years since this report was published, we find levels of poverty and inequality which Beveridge thought would be eliminated.

On publication day (1 December 1942) people queued overnight to buy a copy and it sold 60,000 copies straight away. Nicholas Timmins speculated whether it may ‘stand alongside Stephen Hawking’s A Brief History of Time as one of the most bought, but least read books ever published in Britain’ (For more information see Timmins, Nicholas, The Five Giants: A Biography of the Welfare State (London: Harper Collins, 1995, new edition 2017).

Beveridge wasn’t right about everything though. Many have criticised him for assuming a model of working life which depended on a male breadwinner, employed in stable work between leaving school and retiring, married to a housewife in a lifetime heterosexual relationship. He was wrong about lifetime secure jobs. He was wrong about women. He was wrong about marriage. He did not give adequate attention to disabled people who find it difficult to find work through discrimination and lack of support.  The scheme did not cope well for people in precarious work or to people who struggle to stay in full-time employment. The world has changed. Many of Beveridge’s assumptions were wrong, or have been overturned by demographic change. His scheme has been diluted by the erosion of the surrounding scaffolding of full employment and the wider welfare state.

Beveridge was wrong about a lot of things, and it isn’t entirely fair to criticise him for being unable to foresee the future, but my copy of his report is still one of my most treasured possessions:

My own copy of the report is a reprint from 1974, (price £2.35) which I acquired second-hand some time in the 1990s for £5.25. You can usually access it online these days but not back in the 1990s and sometimes it’s good to have a hard copy.   The report has a wealth of information about Beveridge’s thinking behind his scheme. The report and its appendices, running to 200,000 words, is also full of detail about the pre-war National Insurance scheme.  It has provided me with valuable information for my research project.

I was looking at it today, not because of the anniversary of its publication but because I needed some information in it about levels of sickness benefit in 1911.  Beveridge was wrong about many things but he also has a typo in his report. On page 215 he notes that the original 1911 sickness benefit was paid at a lower rate to ‘unmarried miners’. No William, not miners, minors: people under the age of 21.  Young people were assumed to need less income when they were ill than their older neighbours but this rule was later changed. Women were paid at lower rates than men. Anybody claiming benefit for more than twenty-six weeks was paid at half the rate.  Later, married women were paid at lower rates than unmarried women but miners (men) were eligible for the full rate of benefit for the first twenty-six weeks of their claim.

But the report is so useful and so important. I can forgive him this typo.

If you want to know more about the Beveridge Report, there is useful information and discussion in this Open University resource

I’ve recently published a couple of book reviews, one on the history of the ‘underclass’ and another on women and social security. These two books provide important background for my own work which concerns the history of concepts of incapacity for work and how that relates to policy on the ground and on the particular challenges for women claiming incapacity benefits. Here’s a brief summary of what I thought about them.

Welshman, J. (2013) Underclass: a history of the excluded since 1880 2nd ed.
Bloomsbury: London (review published in Social Policy and Administration) 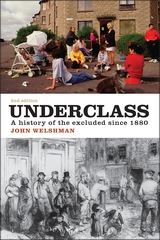 Welshman’s book provides us with a guided tour of the concept of the ‘underclass’ since the late 19th century, moving through related concepts such as ‘problem families’, ‘unemployables’, ‘socially excluded’ to the recent Coalition Government’s idea of ’troubled families’. A lot of this is about language: the language that policy makers use to talk about social problems and how that relates to the ideas that researchers use to look at the same problems. They don’t often connect but these ideas really matter. Once a concept like the underclass takes hold it is difficult to escape from it. We see that in the field of disability benefits with the current media obsession with ‘benefit scroungers and ‘hardworking families’. There isn’t much evidence for either of these concepts but the ideas take hold never-the-less and make it much more difficult for real people to navigate the shark-infested waters of benefits claiming. Welshman’s book is important because it shows us how these ideas have developed over the last century.

Goldblatt and Lamarche, on the other hand, are mainly concerned with the present day. Their focus is on the difficulties that women have with accessing social security across the globe. The book reminds us that, across countries and across time, men and women’s participation in paid work and unpaid domestic and caring responsibilities is unequal and that this leads to unequal access to social security in old age or when paid work is not available. The book has a very broad reach, covering countries as far apart as China and Bolivia. There is a lot of detail for readers interested in particular countries but perhaps the most useful chapters are those that look at the issues from a broader perspective. These chapters provide useful overviews of the debates and may be particularly useful for readers who are looking for an introduction to the issue of women and social security with an eye to human rights and feminist analysis.

For the full reviews, see the links to the journals.

It is a privilege to have the opportunity to review books. Now I have to get on with some more.

Researchers often talk about serendipity in research: that means coming across something when you didn’t expect to, or as the dictionary defines it: ‘the faculty of making happy and unexpected discoveries by accident’ (Oxford English Dictionary). My last trip to the National Library of Scotland produced such a happy accident. I was trying to find a copy of the ‘model rules’ for approved societies from 1912. These advised societies how to write rules about things like ‘behaviour during sickness’, for example when it would be appropriate to stop someone’s benefit because they had been drinking or fighting. I knew I had read these in the library before and had made some notes but wanted to check them again for further details. So I duly ordered them up through the online library catalogue. Instead of providing me with just one booklet, the librarian produced an entire box of leaflets and pamphlets – it seemed there was more than one copy of the model rules. There were rules for men, rules for women, rules for Scotland, rules for England, rules for Ireland, rules for new societies, rules for old societies. Actually they were all quite similar to each other (at least in relation to things that I was interested in). The most exciting thing for me though was a tiny little leaflet which turned out to be in entirely the wrong place. This leaflet was ‘The Family Guide to National Insurance’*, published in 1948 and, it seems, delivered to every household in the country. In it was an introduction to the scheme and, best of all, cartoons of owls. Owls claiming benefits:

I loved it. I couldn’t borrow it from the library but I found a copy online in the Science Museum, an archive film about the guide on the Pathé website and, eventually, a copy available from a second hand bookseller, so I now I have my very own ‘Family Guide’. I told the library that the booklet was wrongly filed so I hope they will now be able to catalogue it and make it available to other enthusiasts (whether interested in National Insurance, public information, mid-century cartoons or owls).

What does this add to my research though? Well the process of looking for the booklet also led me to the Science Museum and the Pathé website and a whole world of archive material on the post-war National Insurance scheme. That probably doesn’t add much to my actual research but it gives me another glimpse into the world when the scheme was first introduced – and an excuse to put owls on my blog (and tweet about them @JackieGulland).

Sometimes my research feels as if it is being conducted in a bubble. I am looking at a fairly small part of the world of social welfare and mostly in the past. A recent publication by Inclusion Scotland helps us to see things from a wider view. A Vision for an Inclusive Scotland provides a clear overview of the many ways in which disabled people are left behind: in employment, social care, transport, social security, education, protection from abuse, housing and healthcare. The general message is that policies and services should be integrated to prevent exclusion. It also reminds us that welfare benefits should not just be about getting people back to work but that they should also

support all citizens by providing an adequate income and assisting disabled people to achieve and maintain independent living. A welfare system worthy of the name should be underpinned by a commitment to fundamental human rights. All of those using it should be treated with dignity and respect. (p10).

Across the twentieth century benefits systems have often made getting back to work the key objective and have rarely treated claimants with dignity and respect. Incapacity benefits decision making has usually been focussed on narrow medical evidence which has not taken account of the many disabling barriers that make it difficult for people with disabilities and health problems to get into work. A Vision for an Inclusive Scotland reminds us that these issues are interlinked.  If public transport is inaccessible, then it is more difficult for disabled people to get to work.  If people do not get the personal help they need at the time they need it, it is more difficult for them to work.  And if it is difficult or impossible for someone to find a paid job, they need enough money to live on.  The booklet was published in Scotland just before the recent referendum on independence but its message is important at all levels of policy making and provides suggestions for how different levels of government (UK, Scotland and local) can do something about this exclusion.

This research was funded through a Leverhulme Trust Early Career Fellowship (ECF-2012-178).

As an honorary Public Engagement Fellow with the BELTANE PUBLIC ENGAGEMENT NETWORK, Jackie Gulland is committed to making academic social science accessible to everyone. The Beltane fellowship enables her research to a wider audience.