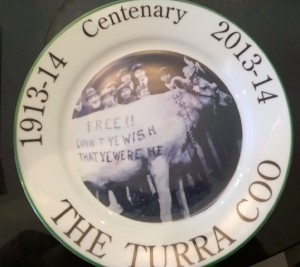 Why would someone give me a plate with a cow on it? This was a gift from a family member, recognising my obsession with all things to do with the 1911 National Insurance Act. The plate commemorates the incident of the ‘Turra Coo’ in 1913. The National Insurance Act required employers and workers to make weekly contributions from their wages in return for sickness and unemployment benefits and the right to health care. Some employers objected to the principle of making contributions, including a farmer from Turriff in Aberdeenshire. When he refused to pay contributions for his farm workers, his cow (the Turra Coo) was impounded by the local sheriff officers, leading to a local riot and the cow becoming an emblem of local protest. For the full story, see here
A hundred years on from this farmer’s protest, the Coo has now become a tourist attraction, with a statue in Turriff town centre*: 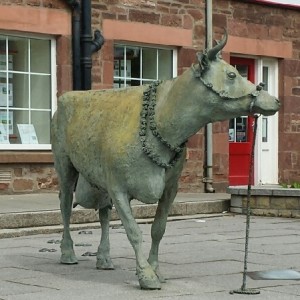 and a commemorative plate. So now I have my plate but I’m not sure I really want the plate on my office wall. The problem with the Coo is that it symbolises objection to the Act and the principle of National Insurance. There are a lot of problems with National Insurance as a principle for funding the welfare state but it has its supporters too and, at least in 1911, it provided the basics of health care and sickness benefits for low paid workers, particularly women.

But I found another connection between the Coo and my research at the Social History Society conference last week. Here I had the privilege of hearing a paper by Valerie Hall on women farmers in North East Scotland in the late 19th and early 20th century. Professor Hall’s paper described the complex working lives of women, who combined domestic work, running the farm and a variety of entrepreneurial activities, including selling eggs and dairy products, breeding dogs, cattle and prize chickens, while also bringing up many children and grandchildren. Her presentation including some lovely pictures of cows and references to the Aberdeenshire ‘Doric’ – I couldn’t help but think of the Turra Coo. More important to my research though was the clear argument that it was not easy, or indeed possible, to identify where ‘work’ and ‘not work’ happened in these women’s lives. On the same panel we also heard from Professor Dianne Newell who talked about the indigenous women in British Columbia at around the same time, combining their ‘work’ in the salmon canning factories with household maintenance and ‘doorstep entrepreneurship’: making traditional baskets and rugs and trading these for cash or goods with middle class white tourists. Again the division between ‘work’ and ‘not work’ was blurred in an endless and seasonal struggle for survival.
The women described in these two conference papers lived in a different era and in worlds which have long changed but the reality of the complexity of women’s working lives continues, particularly for poor women in precarious part-time employment. In some ways these papers look like a reinforcement of the gendered idea that a ‘woman’s work is never done’, particularly a poor woman’s work, but for me they illustrate a rather different point.  Welfare benefits, and particularly incapacity benefits, depend on an understanding of what we mean by ‘work’.  Women’s working lives, and many disabled people’s lives, do not fit a conventional idea of work.  If welfare states are dependent on the idea that people (men or women) should ‘work’ and that their entitlement to benefits and services should be conditional on that, then we must question conventional, gendered assumptions about what constitutes ‘work’.
So thank you to the Turra Coo plate for helping me to make these links.

*thanks to Viv Cree for the photograph

2 thoughts on “Connecting the Turra Coo and women’s work”

This research was funded through a Leverhulme Trust Early Career Fellowship (ECF-2012-178).

As an honorary Public Engagement Fellow with the BELTANE PUBLIC ENGAGEMENT NETWORK, Jackie Gulland is committed to making academic social science accessible to everyone. The Beltane fellowship enables her research to a wider audience.